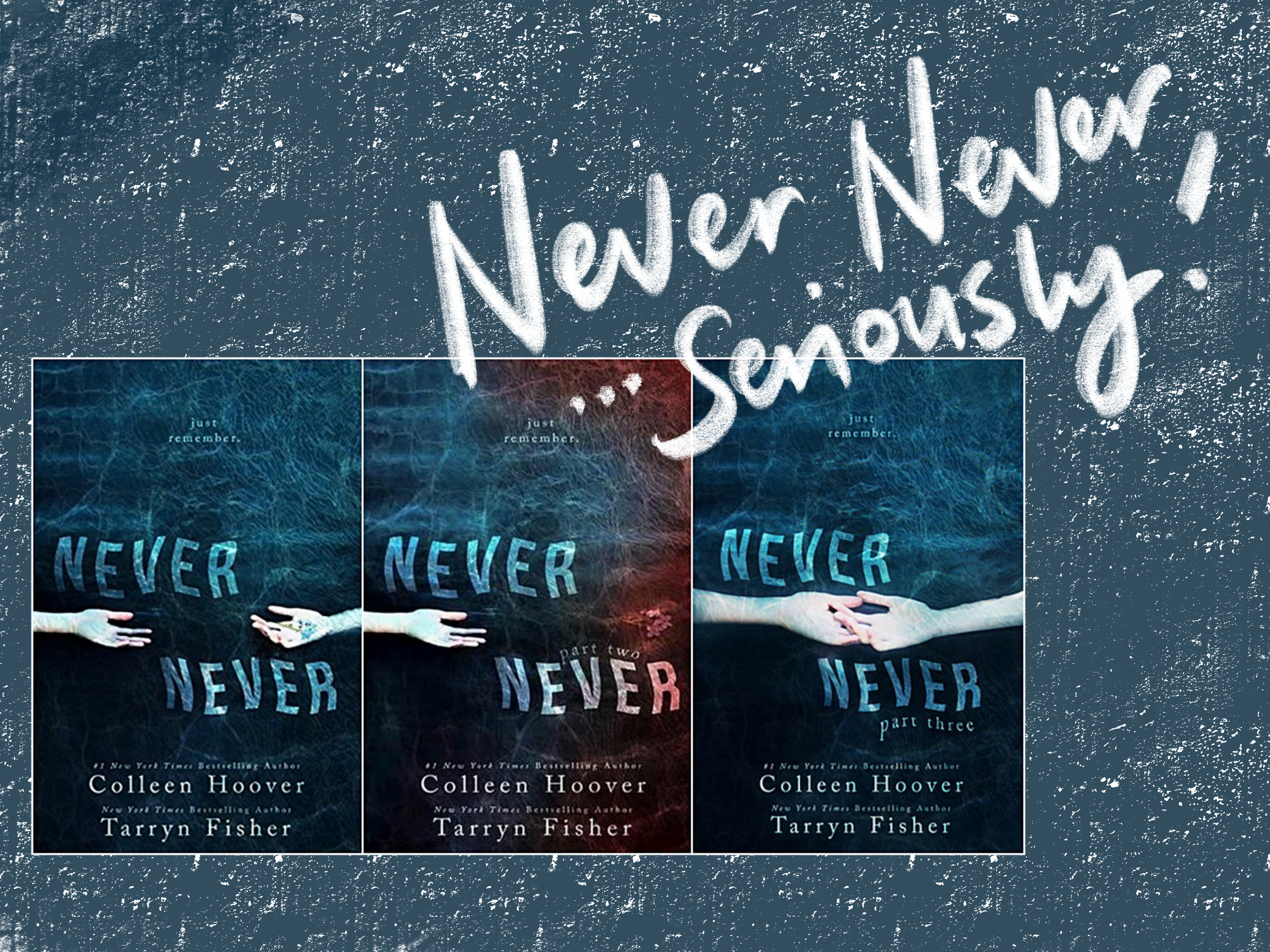 I haven’t finished—started, actually—a mystery novel after Verity but since that book reminded me of the disaster that is this series, I’m gonna talk about this instead.

I read the books waaaay back in 2016, though, but it feels like it was just yesterday (now that it was unearthed from the depths of my memory).

So on my post about Verity, I mentioned about reading most of Colleen Hoover’s works and all of them were romance novels apart from that one. But after going through my Goodreads ‘mystery’ shelf, I was reminded of Never Never—a three-part series that Colleen co-wrote with Tarryn Fisher.

Best friends since they could walk. In love since the age of fourteen.

Complete strangers since this morning.

Silas races against time as more truths unravel, while others twist tighter together. And now, the stakes are higher as Silas’ control slips and others begin to point fingers. Charlie is in trouble and he must be the one to bridge the chasm between their past and their present. Because somewhere between I love yous and Never Nevers and Never Agains, a truth they can’t imagine, beckons to be found.

I’m gonna start with the reason I forgot this series even existed: it’s a fucking joke.

The entire series of books were just titled Never Never, just an addition of 1, 2, and 3 at the end. Not sure if it was the lack of creativity or thought on the authors’ part, but it is what it is. And to be honest, it truly is a series of books that one should never read.

The first book started strong. It would hook you to the point where it would be impossible to put it down and you’d just wanna read more and more and more. Until you get to the second book where it’s just… okay, just fucking get on with it.

You’re still there, you’re still hooked. But quite frankly, at this point, it’s like you’re just there to just get the whole thing fucking over with. And then you get to the third and final book. You get to the end and you’re like WHAT IN THE FUCKING HELL WAS THAT!

The thing that pissed me off is it’s like they courted you, made you feel special, took you out on such romantic and elaborate dates, and then they end up fucking ghosting you or cheating on you and breaking your heart.

The story had such potential but everything went down the drain with that incredibly horrifying ending. It was so ridiculous that you just wanna fucking get back the wasted hours that you spent invested on this.

Needless to say, I hated this series. And I hate the fact that I was even reminded of it. It truly is a never moment and if you were planning on reading this because maybe you’re a Colleen Hoover or a Tarryn Fisher fan, then I suggest stirring away. Stay the fuck away from this disaster. I don’t know what the hell the authors, the editors, and the publishers were thinking with this.

And oh, it’s so fucking bad, even Colleen Hoover herself gave it a one-star rating on Goodreads. Imagine that!

My Mystery Week Book #3 (+2): Never Never Series by Colleen Hoover and Tarryn Fisher. (Not sure if I can actually manage to post a book review for the rest of the week but here’s to hoping.)

It’s Mystery Week on Goodreads and I’ve decided to join in on the fun and feature/review some Mystery novels on this blog for an entire week.

Check out my 2020 Reading Challenge — a growing list of books that I read this year.